US pushing for more UN sanctions on North Korea over missiles 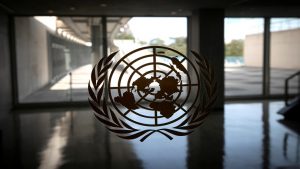 The United States is pushing the United Nations Security Council to impose more sanctions on North Korea following a series of North Korean missile launches, the US ambassador to the UN, Linda Thomas-Greenfield, said on Wednesday.

“The US is proposing UN sanctions following North Korea’s six ballistic missile launches since September 2021, each of which were in violation of UN Security Council resolutions,” Thomas-Greenfield posted on Twitter.

Earlier on Wednesday the United States imposed unilateral sanctions over the missile launches.

It blacklisted six North Koreans, one Russian and a Russian firm, accusing them of procuring goods for the programmes from Russia and China.

A US diplomat, speaking on condition of anonymity, said the United States had proposed five of those individuals also be subjected to a UN travel ban and asset freeze.

The move has to be agreed by consensus by the Security Council’s 15-member North Korea sanctions committee, which includes Russia and China.

“We continue to coordinate with partners to prepare the additional three individuals and entities designated by State for UN nomination,” the US diplomat said.

Since 2006 North Korea has been subjected to UN sanctions, which the Security Council has strengthened over the years in an effort to target funding for Pyongyang’s nuclear and ballistic missile programmes.

US President Joe Biden’s administration has sought unsuccessfully to engage Pyongyang in dialogue to persuade it to give up its nuclear bombs and missiles since Biden took office in January last year.

North Korea continued developing its nuclear and ballistic missile programmes during the first half of 2021 in violation of UN sanctions and despite the country’s worsening economic situation, UN sanctions monitors reported in August.