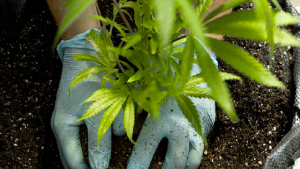 The man who was arrested for cultivating cannabis at the Union Buildings says he felt violated by police during his arrest on Wednesday. The man who calls himself “King Khoisan SA”, has been camping at the seat of government since 2018.

He and Donovan Manuel, who was also taken into custody, appeared briefly in the Pretoria Magistrate’s court yesterday.

They are part of a group that has been living in tents on the lawn next to the statue of former late President Nelson Mandela. They want government to recognise their language and acknowledge them as the first nation of South Africa.

“I felt very violated by the police. They lied about having a search warrant which they didn’t show, and they moved to my sleeping quarters with their dogs, forensics also came, they also moved along. They were scrutinising the camp from one place to another. For them it was common but for me, it was once again invading my privacy.”

Police say the suspects are welcome to put forward their allegations in court.