Jallow gets debutants Gambia off to winning start 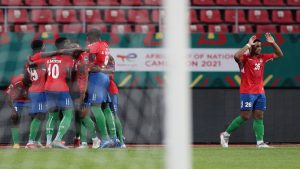 Gambia’s Ablie Jallow scored early as they made an impressive debut at the Africa Cup of Nations finals by beating Mauritania 1-0 in their opening Group F encounter at Limbe Stadium on Wednesday.

Jallow struck with a left-footed effort from the edge of the penalty area to put Gambia ahead after 10 minutes in their first game at the finals.

There were also good second-half chances for the small west African country, one of two debutants in the 24-team field for the tournament in Cameroon.

Gambia are joined at the top of the group standings by Mali, who edged Tunisia 1-0 in Limbe earlier on Wednesday in a controversy-filled encounter.