Children aged 10 and below had lowest COVID-19 cases during 4th wave: NICD 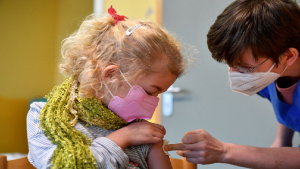 The National Institute for Communicable Diseases (NICD) says children aged 10 and below were recorded to have had the lowest number of COVID-19 cases during the country’s 4th wave of the pandemic. The Health Department has warned that despite a noted decrease in COVID19-related deaths, the Omicron variant is highly transmissible.

The NICD’s Michelle Groome was speaking during a virtual media briefing on government’s efforts to fight the pandemic.

“In terms of age, I think we know there was a lot of concern at the beginning of the fourth wave in terms of the increases in numbers of COVID-19 in children but in under 10-year-olds, the incidents have remained the lowest out of all the age groups. I think there were increased incidents, compared to other waves, in the 20-39-year-olds. But we have seen a decrease in terms of the overall incidents across the waves in the elderly.”

The NICD also says there has been a decrease in the COVID-19 test positivity rates across all nine provinces over the past two weeks. Gauteng has officially exited the fourth wave of the coronavirus pandemic.

The Health Department has warned that, despite a noted decrease in COVID-19-related deaths, the Omicron variant is highly transmissible.

“Gauteng has officially exited the fourth wave, according to the wave metrics that we have been using for previous waves. All the provinces over the past two weeks have had decreases in the percent positivity and now we have Gauteng and the northern-eastern parts have now returned to lower positivity rates followed by the other provinces.”

The video below reports on Gauteng exiting COVID-19 fourth wave: