Bishop Mpumlwana to approach government on guidelines for Ministers&#8217; conduct in public 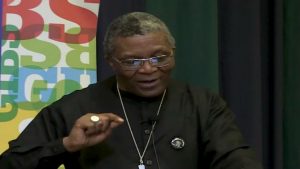 South African Council of Churches general-secretary, Bishop Malusi Mpumlwana says he will approach the government to find out if there is a guideline as to how Ministers should conduct themselves in public.

This after Transport Minister Fikile Mbalula made offensive remarks when referring to criticism of the COVID-19 Taxi Relief Fund which he launched on Tuesday.

Mbalula has since apologised for the remarks saying they were unfortunate and should not have been uttered in public. He apologised to the government and the public for any embarrassment he may have caused.

Mpulwana says leaders should be careful of what they say in a country that is grappling with gender-based violence.

“The unfortunate remarks made by minister Mbalula requires that we raise the matter with government. As to whether there isn’t a moral code that Ministers must observe in their public communication. Not only was the choice of language was inappropriate, but it was more serious for the sexual analogies he made. In a society that is reeling from femicide. Killing of women by their lovers,” says Bishop Malusi Mpumlwana.

The Taxi Relief Fund is aimed at helping to mitigate the impact of the COVID pandemic on the taxi industry and will be shared by minibus and meter taxis and e-hailing operators.