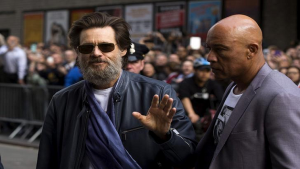 Actor and comedian Jim Carrey celebrates his 60th birthday on Monday. The Canadian-born actor was taken under the wing of the late comedian Rodney Dangerfield early in his career, emerging as a star in his own right in the early 1990s US television show “In Living Colour.”

He has won two Golden Globe Best Actor awards for his performances in the 1999 movie “Man on the Moon” and for “The Truman Show”.

After becoming a major box office draw for his comedic performances, Carrey moved on to more dramatic roles with the 2004 film “Eternal Sunshine of the Spotless Mind” and dark thrillers including the 2007 numerology-inspired “The Number 23”.

In 2008, Carrey returned to comedy with “Yes Man”, a film in which he played the role of a man who says “yes” to everything.

Similarly in “Liar Liar,” (1997), Carrey played an attorney who is magically prevented from lying for 24 hours when his son’s birthday wish for him, to tell the truth, comes true.

Carrey made his latest movie appearance in the 2020 film “Sonic the Hedgehog”, in which he plays villain Dr. Ivo Robotnick, a role for which he won the Best Villain in A Movie prize at the Critics’ Choice Awards.